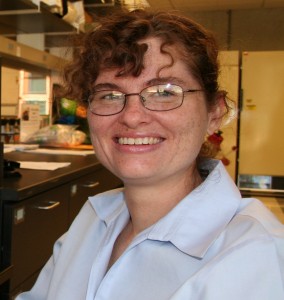 For nearly 10 years, Dr. Danielle Lemay, assistant professional researcher at the UC Davis Genome Center and Head of Bioinformatics Initiatives at the Foods For Health Institute, has called UC Davis home. And though she arrived on campus with a B.S. in Electrical Engineering & Computer Science from MIT, about as far removed from dairy science as one could get, she soon became attracted to the discipline and today is one of the world’s leading researchers and communicators on milk genomics.

“As an undergrad, I researched the development of signal processing for the profoundly hearing impaired,” says Dr. Lemay. “My education led me to a career as an engineer, designing circuits in Silicon Valley. But I knew I did not want to be in computers my whole life, so after paying off school loans, I began my graduate studies in Nutritional Biology at UC Davis, where my plans were to apply bioinformatics to nutrition research.”

Dr. Lemay earned her M.S. in Nutritional Biology in 2005, and three years later received her doctorate. Her knowledge of computers and engineering paved the way for her master’s thesis on the computational identification of binding sites for peroxisome proliferator-activated receptors, which are proteins used in genetic expression. Her doctoral dissertation, conducted in Bruce German’s lab, was on the biology of lactation.

“As a post-doctoral researcher, I was part of the Bovine Genome Sequencing and Analysis Consortium and led a team of 19 scientists to produce a companion paper devoted to the evolution of milk and lactation,” says Dr. Lemay. “Today my research focuses on answering two major questions: what is milk, and how do you make it? To that end, I study the genes that are responsible for making milk–those that are expressed in the mammary gland during pregnancy and lactation–and how these gene products work together to produce this marvelous fluid.”

Dr. Lemay believes this marvelous fluid known as mother’s milk is a magic potion, as it contains all of one’s offspring’s necessary calories, macronutrients and micronutrients, including special molecules that feed good gut bacteria, an arsenal of both passive and active immune protectors, and stem cells.

“The potion also makes you smarter. It makes you happier. And best of all, the potion is formulated to meet individual needs based on the environment and the genetics of the mother,” says Dr. Lemay.

Dr. Lemay’s passion for milk is communicated monthly through the “SPLASH! milk science update” e-newsletter for The International Milk Genomics Consortium (IMGC). As the newsletter’s founder and executive editor, Dr. Lemay explains that the purpose of the newsletter is “to make it easier for academia and industry to stay up-to-date with the scientific literature on milk.” Currently there are more than 1,500 subscribers.

“Our goal is to keep you current on the hottest topics in milk science and human health in less than an hour per month by featuring the most important articles in today’s scientific journals and explaining why they’re important,” she says.

The newsletter commenced in March 2012 and is supported by the California Dairy Research Foundation (CDRF), much like the IMGC program initiated in 2004. The Consortium’s collective aim is to support the advancement and use of knowledge by facilitating the transition of milk genomics discoveries from experimental data into usable benefits and ultimately to provide science-based explanations behind the evolutionary design of milk. “We want to discover how and why milk is beneficial,” she says.

The Consortium has a membership base of more than 1,000 interested parties (mainly scientists) and the support of dairy industry associations from around the globe. “We intend to continue to support the Consortium, as well as dedicate funding towards important health- and nutrition-based projects,” says Dr. Gonca Pasin, executive director of CDRF.

Such projects include Dr. Lemay’s efforts. “Over the past century, nutrition scientists have identified nutrients that are essential to our survival through a type of fault model analysis. Using various animal models, each nutrient in question was systematically removed and/or replenished in effort to determine whether or not the nutrient is essential and what dose is required to minimize morbidity,” she says. “This type of analysis works well for those nutrients that are absolutely essential but will not help us identify the vast sea of dietary components that may enhance our health in more subtle ways. Thus, my primary aim is to study evolution as a guide to nutritional needs, which is why my research continues to focus on milk and milk production, as milk is the sole source of nutrients for mammalian young and its recipe has been honed by millions of years of evolution.”

For more information on the Consortium and to sign up for the “SPLASH! milk science update” newsletter, visit: http://milkgenomics.org.

This profile was written by Donna Berry, a food scientist and editor in the dairy and food industries. She will contribute monthly “Check Off Dollars in Action” columns to the CDRF website, which will highlight CDRF-supported research efforts and programs and the innovative individuals behind them. To contact her, visit www.BerryOnDairy.com.