Highlights: What You Need to Know About Mud on Dairies

Relatively little research exists on the effects of mud on dairy cattle, but in one relevant study researchers estimated that for every inch of mud, Dry Matter Intake is reduced by 2.5%. This observed correlation between increasing mud and decreasing DMI should predict a concurrent decrease in milk production.  In fact, in a separate University of California study, there was a significant association between increasing precipitation and reduced test day milk, particularly for dairies where cows were housed outside without shelter.

We can also draw from the substantial data collected on beef cattle in Midwestern feedlots. Kansas State reported for anticipated decreases in weight gain for feedlot cattle:

There are probably multiple reasons for decreased growth in young-stock and decreased milk production is adults exposed to mud. Cows will be more reluctant to make their way to the feed ally if they have to walk through mud. When they do walk to the feed apron, depending on the depth of the mud, they can expend significantly more energy doing so. Cows also require increased energy requirements if forced to lay in wet environments and in fact, cows will spend less time laying down altogether. During research conducted by the University of California, cows even preferred to lie on concrete rather than in muddy areas. Lastly, as described below, mud is associated with increased health problems which can also manifest as decreased production. 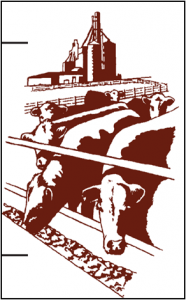 Mud and Disease in Dairy Cattle

Reluctance to transverse muddy areas may lead to cows eating fewer and larger meals (slug feeding) which may increase incidence of rumen acidosis, laminitis and displaced abomasums. Mud and lack of cleanliness associated with wet environments has been linked to increases in mastitis and metritis. Wet conditions contribute to softer hooves and an increase in lameness.

General – Most corrals can be maintained at a minimal cost using some basic practices. In particular and as described below, diversion of outside rain water and regular scrapping can typically be performed with existing equipment and labor. Many if not most mud problems can be managed simply by creating adequate slopes and drainage and regular manure removal. For many dairies soil stabilization with wood chips, gravel, road base, fly ash, concrete etc., may only be required in high-traffic lanes, feed allies and watering troughs.

While corrals can be managed to prevent mud, but correcting mud problems can be difficult if not impossible during the winter, after the soil has been saturated by rain. For that reason it is important to repair, resurface, re-slope and re-compact the corrals during the dry months. A useful mindset reported by some successful dry-lot producers is that corral management and grooming needs as much attention as that given to free-stall management and grooming. Good corral management includes attention to water diversion, routine grooming, corral sloping & drainage, loafing mounds.

Routine Scraping/Grooming of Corrals – Manure greatly increases the water holding capacity (and softening) of soil; Midwest feedlot managers actually sometimes refer to the top layer of manure and soil as “sponge”. For this reason, light but regular scraping throughout the year is essential. Use of a box scraper or similar implement is preferable to use of a front end loader to prevent gouging the corral surface and disrupting the slope. One trick beef feedlot managers have used to prevent employees from scraping too deeply is to use a screwdriver to measure the depth of the compacted manure and set the scraping implement accordingly. 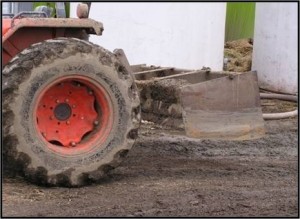 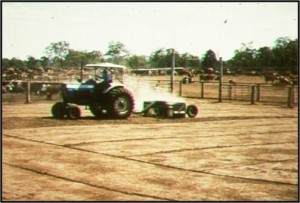 Water Diversion – In some situations preventing outside surface water from entering the lot may be the simplest, most cost-effective action to reduce mud in a corral. Terraces or trenches can be built to direct water around animal confinement areas and gutters can be used to collect rainfall from building roofs for diversion.

Sloping Corral Surface & Drainage – In order to assure adequate drainage, California has regulations specifying slope for pens ranging from 1 ½ to 3 percent depending on the density of cattle. Beef feedlot experts suggest that more aggressive slopes are needed to provide for adequate drainage with minimum erosion, typically between 3 and 6 percent. Less slope may be needed for pens having a reduced cow density. Ideally the corral surface should be shaped to provide the shortest route for storm water to get to a drainage channel. If possible it’s optimal for each pen to have its own definite drain. Relative to type of fill dirt, some disagreement exists in the extension literature. Some managers maintain that manure which has been dried and stacked for at least one year can be mixed with clay solid in a 50:50 ratio and mechanically compacted, resulting in a surface that sheds water as well as compacted clay soil alone. Other authors maintain that only compacted clay soil should be used to repair corrals. Aside from the type of fill used, methods used to compact silage in bunkers have been reported to work well for corral surfaces. As described below, fly ash can be used to stabilize both mounds and corral surface.

Loafing Mounds – More than 60% of beef feedlots in the U.S. use mounds and Cooperative Extension literature contains excellent guidance on managing feedlot mounds. In general mounds should be orientated in the direction of the corral slope to prevent blocking drainage. In some corrals, producers may consider joining the mound to the feed apron and water trough so that cows don’t have to cross muddy areas to access them. Typically feedlot mounds are recommended to be 5 to 8 feet high with a slope of 4:1 to 5:1 allowing cows to rest comfortably. The mound crown is typically kept only 5 to 10 feet wide; wider crowns tend to promote standing water which softens the surface. Typical recommendations for feedlot mound size are in the 45 square feet per head range. Mound stabilization is critical and fill dirt, preferably clay, should be mechanically compacted during the summer. Methods used to compact silage in bunkers have been reported to work well for mounds. As described below, fly ash can be used to stabilize the mound or corral surface. 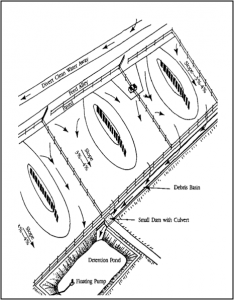 Two excellent resources on the use of combustion by-products are a fact sheet and poster developed by the University of Arkansas Cooperative Extension Service. Producers considering the use of these by-products are encouraged to review this information.

General – One method of preventing mud is to use fly ash (or more typically a blend of fly ash and bottom ash) to stabilize the corral surface or lanes of high animal traffic.  Fly ash (or flue ash) is a combustion product of industrial incinerators consisting of the fine particles that rise with the flue gases. When collected for use, fly ash has the consistency of talcum powder, making it difficult to transport or apply in its pure form. In contrast, the “bottom ash” which is typically removed from the bottom of the broiler, will have consistency more like fine gravel or course sand. Between one third and one half the combustion ash produced in the U.S. is recycled, often for the production of cider blocks, cement or to stabilize soil during road construction.

A unique feature of fly ash is its “pozzolanic reaction” with calcium in soil, setting up a mixture that is similar to concrete, greatly stabilizing the surface and minimizing mud. Unlike fly ash however, much the pozzolanic activity in bottom ash has been lost during its transport in water to storage ponds. Bottom ash then has little benefit as a soil-stabilizing amendment by itself, but it is frequently mixed with fly ash. Such Bottom Ash Blend (BAB) products have soil-like characteristics, are easy to work with and still maintain the ability to bind and stabilize soil. For ease of use, ideally the supplier provides producers with a 70% bottom ash and 30% fly ash mixture, based on volume. 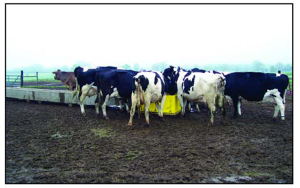 Sourcing Fly Ash – California has the greatest number of biomass power plants of any state and also has some half dozen coal-fired plants. Not all incineration plants will market combustion products appropriate for use on farms. Fly ash should be sourced from incinerators using only organic material (coal, prunings or untreated, non-painted lumber) to avoid contaminants like heavy metals. Because different types of coal or other organic fuel may contain different constituents, it is import to discuss the applicability of a particular product with the source providers. For instance, some ash products used for soil stabilization may not a suitable consistency or contain adequate calcium to obtain “cementitious properties” and gain high strength over a short time. Because of the inherit differences between local soil and combustion ash products (or other stabilizers), it may be prudent to perform a pilot test on a smaller plot for effectiveness. 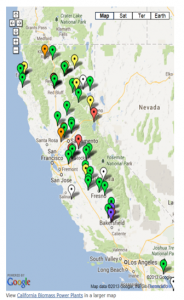 How Fly Ash is Applied – Simply spreading fly or bottom ash on a corral surface (and hoping it will be worked into the soil by cow hooves) will provide little if any soil stabilization. It is reported that available equipment such as bulldozers, dump trucks and tractors can be used. During installation however the addition of water and compaction is critical if significant strength is to be achieved. Two general methods of application of fly ash or ash mixtures have been described in the Extension literature:

Mixing Ash with Soil: In this case fly ash or a fly and bottom ash blend is mixed with the soil, frequently in a 50:50 ratio, watered and mechanically compacted. While this can be accomplished with a front end loader or a PTO-powered tiller, in either case the mixing has been reported to be difficult and time consuming. Using clean clay soil is important to realize the maximum strength in this process.

Using Ash to Create a Pad: In this case, a fly ash & bottom ash blend is watered and compacted to create a pad on existing compacted soil. This is reported to be a significantly more efficient installation but will require more combustion product.

For areas that will only have cattle a pad having a pre-compaction depth of 10 inches should be sufficient. To support heavy equipment like mixer wagons, a pre-compaction depth of 18 to 24 inches is warranted. To compact the area tracked and rubber-tired equipment and rollers have all been used successfully. Stabilized soil takes approximately a month to reach full strength, although it will support cattle and equipment immediately after construction. Implements used to compact ash products should be cleaned immediately to prevent the mixture from setting up on the equipment.

Economics – Using proper construction techniques and good corral management, pens stabilized with combustion products potentially may give years of service. Corrals stabilized with coal ash at the Texas A&M research feedlot in Bushland, TX were created some 25 years ago and are still holding up well.

Regulatory – When properly applied and compacted however, fly ash does not result in runoff with containments of public or environmental health concern.  In order to avoid potential contamination with contaminants like heavy metals, fly ash should be sourced from incinerators using only organic material. These include forest-derived fuels and agricultural prunings, sawmill byproducts, pallets and untreated, non-painted lumber and coal. Studies performed by USDA/ARS and Southern Illinois University have demonstrated benign leachate from barnyard areas stabilized with combustion products to be well below US EPA maximum concentrations for drinking water.  While CalRecycle regulations define wood ash as a non-hazardous solid waste, the state and regional water boards retain the authority to require submission of information on any dairy practice.

When You Clean Out a Feedlot Pen, Don’t Scrape Too Deep (Ohio State University)  http://gpvec.unl.edu/mud/Enviro-FL-PenSurface.pdf

The CDQAP gratefully acknowledges the following experts who contributed to & reviewed this webpage: