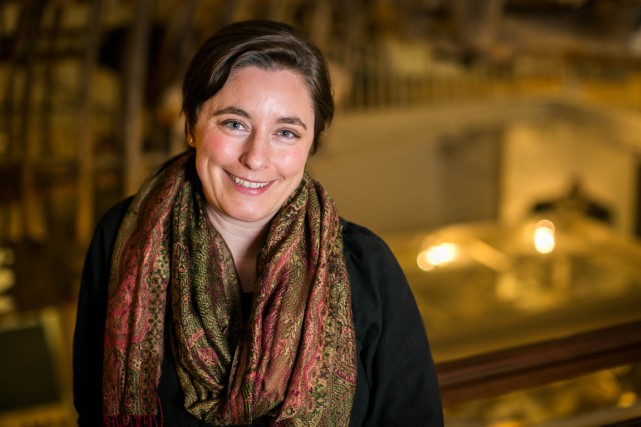 Ask any biologist, and they will tell you that the theory of evolution is one of the foundational pillars of their entire field—and indeed their understanding of how life on earth works. But what could evolution have to do with the dairy industry?

According to Dr. Katie Hinde of Harvard University, quite a bit actually. As she explained, an evolutionary perspective can help with everything from improving the volume of milk production to optimizing husbandry practices. The Check Off Dollars from the California Dairy Research Foundation (CDRF) help support Dr. Hinde as a contributing writer for the SPLASH! milk science update, a monthly newsletter with over 2,500 subscribers. Through SPLASH! she can share the latest evolutionary research and potential implications, as well as present some of her own evolutionary research to the International Milk Genomics Consortium (IMGC). “SPLASH! is a fantastic resource that CDRF funds,” Dr. Hinde said. As she explained, SPLASH! makes important and valuable research accessible to dairy farmers, processors, infant food formula producers and the whole dairy industry. Access to original journal articles can be costly, which the open nature of SPLASH! helps address. And just as importantly, supporting science writers like Dr. Hinde to convey both the contents of new research as well as explain their implications helps make technical or complicated work easier for consumers of the information, like dairy farmers, easier to understand and apply.

Dr. Pasin explained, “SPLASH! was created because we needed to translate complex scientific information eloquently, credibly, in easy to understand format so the industry is kept informed on cutting edge topics in milk science and human health. Our editorial team of seven is very diverse in terms of expertise, background, and geography. Executive Editor Dr. Danielle Lemay is a milk scientist at the UC Davis Genome Center and Prof. Katie Hinde is an anthropologist and primatologist.”

One major concern of dairy farmers is how much milk their cows produce. The genetics of a cow go a long way towards determining how good of a producer she will be, but environmental conditions and non-genetic factors play a crucial role as well. Animal science research has highlighted a number of such factors that correlate with milk production, but an evolutionary approach can help determine the mechanisms through which they can affect cows. Once you understand the “why,” you can best optimize husbandry practices. “You can do the best cost-benefit analyses when you understand how and why certain environmental traits impact milk production, rather than just knowing what impact they have,” Dr. Hinde explained. “It can take your work in a whole new direction.”

One such non-genetic factor of milk production is how many calves a cow has had. Cows who have just had their first calf usually produce less milk than cows that have had multiple calves already. While this fact has been known for some time, why this is the case had not been understood. Evolutionary research revealed that mammals, such as cows, have evolved with traits that maximize their reproduction across their entire lifetime. How did this happen?

The basic tenant of evolution is that genes that improve an animal’s ability to reproduce will be passed onto the next generation at a faster rate than those that impede reproduction, whether that’s through improved survival, increased fertility, or another reason. In this case with first time mothers, a new mother has an entire lifetime of reproduction ahead of her. Therefore, over-investing in a firstborn is not as effective a strategy as restraint (such as producing less milk with the first calf). New mothers that put less effort into their first offspring are more likely to pass on these genes for a conservative approach in the long run, leading to the establishment of this trait across mammals like cows.

It is very important to understand why first-birth cows will produce less milk, for a simple reason: no matter how many resources farmers put into those first birth cows, they cannot overcome the evolutionary influence. However, directing these resources instead toward older cows, which have much less reason to be conservative in their milk production as they are approaching the end of their reproductive period, can result in valuable increases in production.

Understanding the evolutionary underpinnings of challenges faced by dairy farmers creates more informed animal husbandry approaches, like the scenario explained above. Dr. Hinde, enabled by CDRF’s Check Off Dollars funding, can use her articles in SPLASH! to disseminate “a set of organizing principles for how evolution impacts what we see in animal science.” Her articles on SPLASH! with its evolutionary perspective, helps inform better management decisions, and also how researchers from all aspects of dairy science can ask better questions. Integrating an evolutionary perspective, she explained, can allow scientists to frame questions in brand new ways, because they are no longer just relying on wisdom or constrained observations. “Such a perspective can inform how we approach research questions, how we interpret data, that allows us to have greater opportunities for generalizing our findings, because we understand the greater context,” she said.

The evolutionary perspective that SPLASH! supplies is about weaving this different, bigger-picture viewpoint into the other valuable facets supplied by the many other scientific experts who contribute to the blog, from geneticists to biochemists. “It’s not about correcting or chastising other viewpoints,” Dr. Hinde emphasized. “It’s about integration, about exploring the evolutionary phenomena that lie behind what we are seeing in animal husbandry.” To this end, SPLASH! not only helps make valuable scientific work accessible, but it also continues to bring together widespread areas of research that in the past have not always talked across their differences. One example has been evolutionary and animal sciences. But another is also research on human milk and dairy science.

Dr. Pasin explained, “There is a disconnect between human milk science and dairy science. Often human milk scientists don’t care about dairy science and dairy scientists don’t care about human milk. SPLASH! helps provide a bridge between these two related, but often separated, fields of milk science. It is a platform for people to meet in the middle and learn from each other so they can accelerate progress.” She added, “So encourage your colleagues to subscribe and read these fascinating articles.”