One might think that winter storms in December and February put California in a better water position at the start of 2015 compared to one year ago. Think again. The drought remains in full force, and if you can believe it, it’s worse. 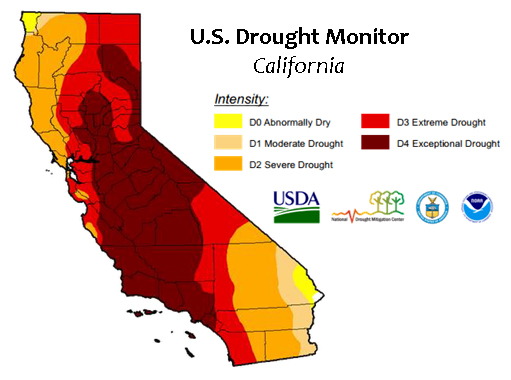 According to the February 17 U.S. Drought Monitor report (see right), 41.2 percent of the state is in “Exceptional Drought,” the rating tool’s most severe drought category. By comparison, just 14.6 percent of California was in this category one year ago.

California’s hardest hit drought region is also home to the vast majority of the state’s 1,466 dairies. With limited water resources, dairy families continue to face tough planning decisions, such as which crops to plant, the number of crop acres to fallow, the amount of outside feed to purchase and the timing of those purchases.

The drought has also fostered a campaign by Midwest states, touting their water and land availability with the hopes of courting California dairy families east. It’s hard not to blame them for wanting to bring some the world’s most productive, efficient and sustainable dairies to their region.

When it comes to weathering the drought, California dairy families will continue to do what they do best – doing more with less. Fortunately, water conservation, efficiency and recycling has long been standard practice for California dairy farmers. For decades, dairy farmers have steadily and dramatically reduced the amount of water they use to produce each gallon of milk. In fact, dairy farmers have reduced the overall water footprint of a glass of milk by 65 percent since 1944. In other words, producing a glass of milk today uses about a third of the water it did during the Franklin Roosevelt administration. (Source: Capper, et al. (2009). Journal of Animal Science.)

Smart, responsible water use is integral to the daily operation of California dairies. Clean water is used to wash cows, sanitize milking areas and cool milk tanks. Later, that water is reused to flush manure from barn floors. Finally, the water is recycled and blended with irrigation water to nourish crops used to feed livestock, such as corn and alfalfa.

California dairy families and farmers know water is a precious, finite resource that must be utilized efficiently and responsibly in both wet and dry years. Dairy families have shown their commitment to protecting natural resources as well as leadership on a number of sustainability issues, such as air and water quality, greenhouse gas emissions, and animal care. Add to that list a commitment to being water-wise as they continue to produce the affordable, nutritious and delicious dairy products millions of families have come to depend upon and enjoy.