From the Governor to your neighbor, everyone is talking about the California drought. That’s a good thing. The drought is real, severe and should act as a call-to-action for all Californians to use water efficiently in both wet and dry years. 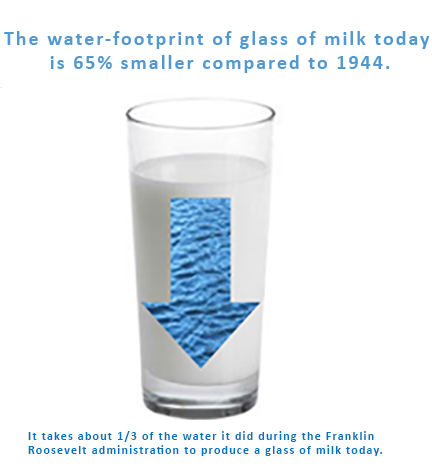 On social media, discussions about the drought come with the seemingly obligatory crop or livestock infographic pointing out that a particular food eaten by Californians requires many millions of gallons of water to produce. With little or no context, and deliberately large sounding numbers, consumers are meant to feel guilty about the foods they choose to nourish their families and encouraged to switch to an alternative.

Rather than drought shaming consumers into picking food winners and losers, a responsible discussion about what it takes to bring food from farm to fork is in order. The fact of the matter is that it takes water to grow food and California farmers have demonstrated time and again they are the best in the nation at producing crops and raising livestock (California has been the top producing farm state in the U.S. for more than half a century).

It takes about 1/3 of the water it did during the Franklin Roosevelt administration to produce a glass of milk today. The water-footprint of glass of milk today is 65% smaller compared to 1944. Innovation has been key to the success of California farmers, including improvements in water efficiency and conservation. Farmers continue to do more with less, feeding millions of families while steadily using less water. According to the Public Policy Institute of California, farmers applied 23 percent less water to their fields in 2005 than in 1980, about the time total agricultural water use peaked. Yet with less water over this same period, average crop yields increased by more than 40 percent.

California dairy farmers are leading the way when it comes to water efficiency. Today, the water footprint of a glass of milk is 65 percent lower than it was in 1944. In other words, it takes about a third of the water it did during the Franklin Roosevelt administration to produce a glass of milk today. Dairy farmers are also leading the way in water recycling efforts, with fresh water reused regularly on the farm. Clean water is used to wash cows, clean the milking parlor and equipment, and cool milk tanks. That water is then reused to flush manure from barn floors and finally recycled and blended with irrigation water to nourish crops used to feed cows, such as alfalfa and corn.

Not only are California farmers doing more with less, they’re unfortunately also doing less. Nearly 500,000 acres of some of the world’s most productive, fertile farm ground was fallowed last year due to the drought. It’s anticipated that nearly half a million acres will again remain fallow in 2015.

With the rainy season almost over, California is settling in for its fourth year of drought.
Our state’s dairy families know that we’re all in this together and remain committed to using the precious resource of water efficiently and effectively. That means continued recycling and reclamation of water on their dairies to maximize its value while continuing to create delicious, nutritious and affordable food for millions of American families to enjoy.