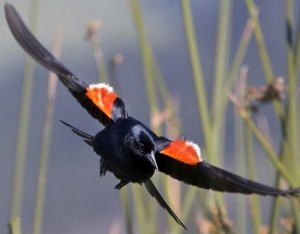 Dairy silage fields in the Central Valley have increasingly become an important nexus between Tricolored Blackbirds, dairy farmers and bird enthusiasts. Due to the loss of California’s natural wetlands – made worse by the state’s fourth year of extreme drought – Tricolored Blackbirds are ever more dependent on these fields for nesting and hatching their young.

From March to July, the colonial landbird can often be found nesting in triticale wheat, oat and other grass-blend fields grown for feed silage. These fields are an attractive site for Tricolored Blackbirds, offering an inviting combination of protective cover from predators and ample food supply.

Unfortunately, the bird’s nesting season coincides with farmers’ springtime crop harvest. Exacerbating the situation, Tricolored Blackbirds tend to cluster in small areas in very great numbers. Tens of thousands of birds – a significant portion of the state’s population – may build their nests on a single farm or even a single field.

Once numbering in the millions, today’s Tricolored Blackbird population is estimated by researchers at the University of California, Davis to be about 145,000 birds. Because the bird is almost entirely in California, nesting success is important to survival of the species.
This season, several Tricolored Blackbird nesting colonies have been found on silage field crops throughout the Central Valley, with some numbering as large as 10,000 birds, nearly 10 percent of the statewide population. Fortunately, dairy farmers have been working with biologists and government agencies to save these colonies by delaying harvest and creating buffer zones around their fields. The California Department of Fish and Wildlife offers important information for farmers regarding avoidance of impacts to Tricolored Blackbird breeding colonies here.

Dairy farmer Steve Shehadey of Bar 20 Dairy in Kerman has had Tricolored Blackbird colonies in his silage fields over the years.

“We want to see these birds thrive,” said Shehadey. “Vibrant biodiversity on and around our dairy is important to the ecosystem, and that’s something we value very much having lived and farmed in this area for generations.”

When dairy farmers like Shehadey make the decision to delay crop harvest, it’s a positive step towards a successful nesting and hatching event for Tricolored Blackbirds. The decision also means that when the crop is harvested late, much of the feed value is lost, and planting of the next crop is delayed. When this happens, a dairy farmer sacrifices part of a five-month investment of water, labor, land – and ultimately – feed for his cows.

Fortunately, resources are available for farmers whose fields are chosen by Tricolor Blackbirds as nesting sites. The Natural Resources Conservation Service (NRCS) offers a program, where reimbursements are made available to farmers who agree to delay harvest for the young birds. More information about the program is available at local NRCS field offices.

California dairy farmers remain committed to a vibrant and healthy environment, which includes strong biodiversity throughout the Central Valley. They will continue in partnership with conservation groups to help protect and enhance the Tricolored Blackbird population, while still doing what they do best – producing safe, affordable and nutritious milk for millions of American families.