A Hanford dairy operator is helping to continue the trend toward cleaner air in the San Joaquin Valley, thanks to an innovative project that uses clean electric power mixers to prepare nutritious feed rations for thousands of dairy cattle each day. 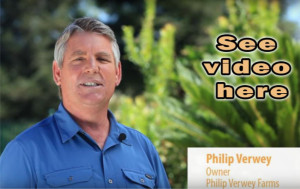 At a recent event at his dairy in Kings County, Philip Verwey unveiled a new project that replaces the use of diesel-powered tractors with electric-powered equipment to mix feed. On most dairies, cows are fed a balanced and nutritious total mixed ration (TMR) composed of forages, grains, minerals and vitamins.

Mixing up feed for hundreds or thousands of cows each day takes a lot of work though – and on most dairies, mixers are driven by diesel-powered tractors. Verwey thought he might have a better idea and he entered into a cooperative agreement with valley air pollution officials to try it out.

“I was just driving home one day and I had the idea to convert our mixing process from tractor driven to electric driven,” Verwey said.

The new electric feed mixer is partly funded by the San Joaquin Valley Air Pollution Control District’s Technology Advancement Program (TAP), which is designed to encourage innovation and development of new emission reduction technologies.
According to the air district, Verwey’s project will result in the following annual estimated emission reductions:

The project will also conserve more than 90,000 gallons of diesel fuel annually. See a short video about Verwey’s project here. This exciting project is just another example of the commitment of California dairy families to being innovators and leaders for clean air, healthy animals and environmental sustainability.

In 2006, the air district required dairies to obtain operating permits that included requirements to adopt management measures for reducing emissions that can contribute to poor air quality. Since adoption of these unique requirements, emissions from Valley dairies have declined by more than 30 percent, helping to support the region’s trend toward cleaner air.

According to the air district, air quality in the eight-county region, stretching roughly from Bakersfield to Stockton, has significantly improved since the 1990s. The region now meets federal clean air standards for lead, nitrogen dioxide, sulfur dioxide, carbon monoxide and fine particulate matter (or PM10). The district is still working to meet new, tougher standards for ozone, but has seen significant improvement in recent years.

These improvements in air quality are all the more impressive when one considers that the region’s population has increased by more than 1.3 million people since 1990. The San Joaquin Valley also faces a natural geographical challenge, with its bowl shape and hot summer days. This creates the perfect oven for “baking” the basic ingredients of smog, resulting in ozone formation.

Cleaner air in the San Joaquin Valley is the result of billions of dollars of investment by Valley businesses, implementation of historic air quality regulations and consistent effort by residents to reduce emissions. The San Joaquin Valley’s more than 885 dairy families have also been doing their part for cleaner air, while continuing to produce safe, affordable and nutritious milk for millions of consumers.