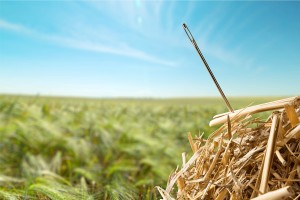 Tiny target, huge problems. How do you find a needle in a haystack? How would you even begin?

Consider a typical haystack. Now, instead of the traditional challenge of trying to find a needle, which is a distinctly different material and shape from the hay, imagine instead trying to find a single rotten piece of hay. That rotten piece is softer and browner than normal hay—and that’s all that sets it apart. How would you even begin? Now, imagine that the one rotten piece of hay can start to turn nearby pieces of hay rotten as well, and the longer it takes you to find the rotten hay pieces, the more pieces of hay start rotting. And meanwhile, parts of the haystack move around and mix into other parts, including sections you may have checked already.

This nightmarish problem, essentially, is the one facing Dr. Richard Breitmeyer, director of the California Animal Health and Food Safety Laboratory System (CAHFS) at the University of California, Davis. His haystack is the 1.8 million dairy cows across California, and the rotten piece of hay represents a cow that becomes infected with a disease. One of the diseases that most concerns Dr. Breitmeyer is Foot and Mouth Disease (FMD). While fortunately absent from the United States for the last 80 years, FMD is a highly contagious disease that can cause massive damage and disruption to the livestock industry. The FMD outbreak in Britain in 2001, for example, shut down Britain’s dairy and meat exports for an entire year, caused an estimated loss of $14 billion dollars and impacted approximately 10 million animals1.

CAHFS is one of the first and most important lines of defense for California’s livestock and poultry—and by extension, all the people that rely on those animals for food and livelihoods. Dr. Breitmeyer and his colleagues want to make sure that if FMD ever does show up again in America, the crisis in Britain is not repeated across the pond. But, in order to do that, the California Department of Food and Agriculture (CDFA) and other emergency responders need a way to rapidly identify an animal with FMD—in other words, they need to be able to find all of the infected pieces of straw in the midst of the enormous, moving hay pile. Inspecting or testing each individual animal is not only prohibitively expensive and far too slow to prevent an outbreak, it would also only work if all movement of livestock and dairy products was stopped. In a normal environment, products are in constant motion, and cows and other livestock are frequently sold or transported across the state and among herds. This movement poses a serious complicating factor: a previously tested and healthy animal could then be brought into contact with an infectious animal, and suddenly an animal that had already been checked off as not a source of disease will be exposed and possibly become contagious itself. But, stopping the movement of animals, and more importantly products, in and of itself causes huge issues and losses. Dairy cows, for example, continuously produce milk. If that milk cannot be shipped because there is a hold while a possible disease outbreak is investigated, it will create not only an economic crisis, but also a disposal nightmare.

To catch a pathogen

To solve this enormous challenge, USDA and laboratories such as CAHFS, have worked to develop a very clever solution. If testing each animal is too costly and slow, why not find a way to test entire herds at once? With dairy cows, this group test can be done by sampling the collected milk from the bulk tank on the farm. Dr. Beate Crossley, a CAHFS leader in virology and biotechnology, has been advocating for and working with the USDA to develop a test that can detect a single infected cow out of a herd of 1,000 cows or more. More than even that, with support from the California Dairy Research Foundation (CDRF), Dr. Crossley and her team have validated this system to increase the number of tests from about 100 samples to nearly 400 that can now be processed at one time in a matter of hours. In other words, an outbreak could be detected in dairies almost anywhere in California, in only a couple of days. With funding and support from CDRF, CAHFS was able to run a large-scale field test of the screening process. The researchers used the bovine viral diarrhea virus as a model for high-throughput testing for FMD, and because it is naturally occurring in dairy cow herds, it can be used to mimic an outbreak of FMD and its detection in milk samples.

The results of the experiment were very encouraging. “We feel very confident now that if we are faced with FMD, we will be able to screen very rapidly,” Dr. Breitmeyer said. “We would be able to see where the disease was, and—just as importantly—where the disease was not.” Knowing that distinction would allow uninfected areas to continue with only minor regulations on travel and commerce, minimizing the damage and disruption to only affected herds and areas. Such dynamic responses would maximize the impact of resources in controlling the outbreak, and minimize both the damage of the outbreak itself and the negative impacts of the response.

Another advantage of this new lab test is that it can be run right in Californian labs, at CAHFS. In the past, samples from suspected cases of FMD had to be sent to a special USDA lab on an island off New York. Now, CAHFS can run its own test and, through its close partnership with the USDA and the CDFA, mobilize the appropriate response if necessary. “We’re kind of like the smoke detector, and CDFA is like the fire department,” Dr. Breitmeyer explained. Such efficient collaborations are essential for rapidly identifying, responding and controlling an outbreak of something as destructive as FMD.

CDRF has long been an important partner as well. Dr. Breitmeyer noted that all too often with infectious diseases, funding happens after the fact. There is unfortunately little support before crisis happens to catalyze a response. “We’re currently getting limited support from the federal government,” Dr. Breitmeyer said of his lab. “Having CDRF support is hugely important for our projects to supply useful and valuable research and developments for the entire dairy industry. Their funding helps us to develop systems to test several hundred samples per day, and validate our system. Now, we are much more prepared for whatever comes our way.”

Dr. Gonca Pasin, executive director of CDRF, noted that FMD does not affect humans therefore it is not a public health issue, but an outbreak could result in quarantine and eradication of animals, a ban on exports, and reduced consumer confidence, all economically devastating risks to American livestock producers. She added that CDRF works very closely with CAHFS and other organizations to maintain and increase the consumer confidence in milk and dairy products.