Despite a welcome wet start to California’s rainy season, long-term prospects for having enough water for agriculture in parts of the San Joaquin Valley are jeopardized by more than just drought. A new proposal by the State Water Resources Control Board (SWRCB) recommends that the unimpaired flows of the San Joaquin River and its main tributaries be increased from the current 20 percent average to between 30-to-50 percent to help fish survive. 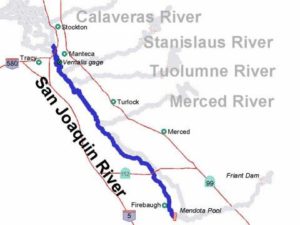 Local irrigation district representatives say the proposal, known as the Substitute Environmental Document (SED), could take up to 240,000 acres of farmland out of use due to a lack of water. In addition, they cited a 2014 study by the California Department of Water Resources that concluded 95 percent of juvenile salmon and steelhead are eaten by non-native predators before they even reach the Sacramento and San Joaquin River Delta. The districts maintain that control of non-native predators – mainly bass – and other non-flow measures would better protect the young salmon and steelhead.

Dairy farmers and others who rely on water from the San Joaquin River have expressed alarm about the plan, noting that they have already made severe adjustments to their business operations in order to make do with less water, and the plan would just compound the problem. Duane Marsen, a Hilmar-area dairy farmer, told the SWRCB that, “There is not a single person who lives in this area who will not be harmed by this proposal.”

The concern over potential water reductions was succinctly expressed by Ethan Jones, a Hilmar High School FFA member, at a Sacramento SED hearing. From a longtime farming family, Jones told the SWRCB that “water is not just a resource, it is our livelihood.” Another Hilmar FFA member, Derek Rios, noted that “our community revolves around farms and dairies. Without them, our community will be nothing.”

At a hearing in Stockton two state legislators representing the north San Joaquin Valley, Senator Cathleen Galgiani and Assembly Member Heath Flora, strongly criticized the proposal. Galgiani emphasized the potential “dire impacts” in the north valley, including a regional economic impact that would be far greater than the $64 million loss estimate in the SED analysis. Flora asserted that “simply reallocating thousands of acre-feet of water for environmental goals with little regard to water users in the Central Valley is unacceptable.”

The debate over the SED will now also include the directives of important federal water legislation recently signed by the president that would clearly benefit agricultural water allocations in California. Water policy experts estimate that this legislation could add up to an additional half-million acre feet of water for human use, but clashes between stakeholders over state and federal water policy differences are certain. In addition, even the SWRCB expects the SED to increase groundwater pumping, and that is certain to conflict with the state’s 2014 Sustainable Groundwater Management Act.

What remains uncertain is the long-term future of California agriculture. As Ethan Jones told the SWRCB, he is from a fourth-generation farming family, “and I would like to grow up to be a fifth-generation farmer. However, I’m worried that it may not be possible.”

Hard work, along with dedication to their land and communities, has made California dairy farmers the greatest milk producers in the U.S. That’s a Golden State legacy that needs to be preserved for future generations of all Californians and dairy product lovers around the world.

The Board is accepting written comments on the proposal until March 17, 2017.