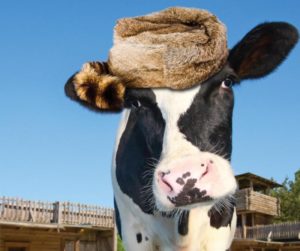 down on its efforts by extending climate policies to 2030 and beyond. The state’s more than 1,300 dairy farm families are now partnering with Governor Brown to do their part by voluntarily reducing dairy manure methane emissions by 40% by 2030. That’s an ambitious goal, but innovation, efficiency, and world-leading productivity give California a great place to start. California’s dairy farm families have long led the nation in milk production and are now doing the same for greenhouse gas reduction and fighting climate change.

The state’s more than 1,300 dairy farm families are now partnering with Governor Brown to do their part by voluntarily reducing dairy manure methane emissions by 40% by 2030.

The state’s dairy farm families have been decreasing their carbon “hoofprint” for decades through increasing efficiency (producing more milk with fewer cows), converting diesel use to electricity, generating solar energy, and continuously reducing their energy use. California dairies are currently taking methane reductions to the next level through their manure management practices.

Anaerobic digesters have been operating on a growing number of California dairy farms for more than ten years, and the technology has evolved greatly. These digesters capture methane to be used as renewable energy or carbon-negative, clean-burning transportation fuel. Additionally, through collaboration with state agencies and researchers, California dairies will soon measure reductions from non-digester technologies that prevent methane emissions from being released. This includes mechanical manure separators, a technology that has been used on a growing number of dairy farms for more than 30 years. With the help of state incentive funding, more digesters and other methane reduction projects will be put in place within the next decade.

The California Department of Food and Agriculture (CDFA) is currently administering a total of $50 million to support development of these projects through the existing Dairy Digester Research and Development Program and the new Alternative Manure Management Program. CDFA received 36 applications for new digester projects by the June 30 deadline, which shows both tremendous interest and commitment by the state’s dairies. Grant awardees will be announced in September.

In addition to the CDFA programs, the California Public Utilities Commission will direct the implementation of at least five dairy biomethane pilot projects. Each of the five projects will involve the development of multiple dairy manure digesters to create biomethane, to be injected into natural gas pipelines. Projects for this program will likely be selected in the first half of 2018. Through implementation of these pilot projects, California will create dairy biogas-derived, clean-burning transportation fuel to replace diesel in heavy-duty freight.

Collaboration between dairy families and the state is strong and moving forward with great momentum. Governor Brown’s ongoing support to provide additional funding will be key. These efforts are critical as California dairy families aim to voluntarily reduce methane emissions and avoid potentially costly regulation in the future.

Through this productive partnership with the state, California’s dairy farm families will continue to serve as global leaders in reducing greenhouse gas emissions and fighting climate change.