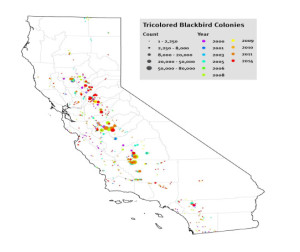 February marks the beginning of the nesting season for the tricolored blackbird, and, along with that, the increased need for awareness and conservation actions by dairy farmers and other private landowners in California. This effort is a critical part of a larger endeavor to identify sustainable habitats and practices to bolster the numbers of tricolors in California, where almost all of these birds reside.

Once numbering in the millions, the tricolored blackbird population has been on the decline in recent decades. While the bird’s population has fluctuated over the years, experts attribute loss of the bird’s natural habitat, such as wetlands and native grasslands, food sources and the state’s crippling drought as causes for the species’ decline. The decrease in natural habitat has driven many nesting tricolors to dairy forage fields in the Central Valley (see map). A recently formed working group seeks to restore the tricolored blackbird population to stable levels and expand their habitat.

Audubon California’s Samantha Arthur has served as a dedicated point person for the working group’s interaction with dairy farmers who have tricolors in their fields. “With nearly 40 percent of tricolored blackbirds nesting on silage fields, dairies play a critical role in the recovery of this species,” Arthur noted. “Audubon California has seen first-hand the efforts of dairymen to save thousands of tricolored blackbirds in partnership with biologists and agencies.”

Dairy Cares worked with Arthur to produce a video (view here) on the efforts of Central Valley dairy farmers, including WUD President Frank Mendonsa of Tipton, to protect nesting tricolored blackbirds. In conjunction with this video, Dairy Cares also produced a PowerPoint presentation for outreach to farm associations. WUD established and led a dairy farmer focus group to secure funds that could be used for harvest management contracts to compensate dairy farmers who forgo harvests to benefit the blackbirds.

Paul Sousa has been the lead representative on tricolor issues for WUD, helping with this season’s outreach and working-group coordination. Noting that the California Fish and Game Commission voted in December to make tricolors a candidate for listing under the California Endangered Species Act, Sousa says the species will be studied, and at the end of the study period, the commission will decide whether to list tricolors as an endangered species. He adds, “During the period of candidacy under state law, the species has all the protections of listed species.”

Sousa also noted that the commission recently acted to allow the “incidental take” of tricolors if a farmer is working with USDA’s Natural Resources Conservation Service or a department biologist to protect a nesting colony on his farm. Under this new regulation, a biologist would provide the farmer a date when the birds would be expected to be finished with their nesting and allow the farmer to harvest after that date without incidental-take liability.
Steve Shehadey of Bar 20 Dairy in Kerman has had nesting tricolors in his silage in recent years. “We want to see these birds thrive,” he said last year. “Vibrant biodiversity on and around our dairy is important to the ecosystem, and that’s something we value very much, having lived and farmed in this area for generations.”

For more information on tricolors contact Sousa at pauls@westernuniteddairymen.com; and/or Noelle Cremers at ncremers@cfbf.com.