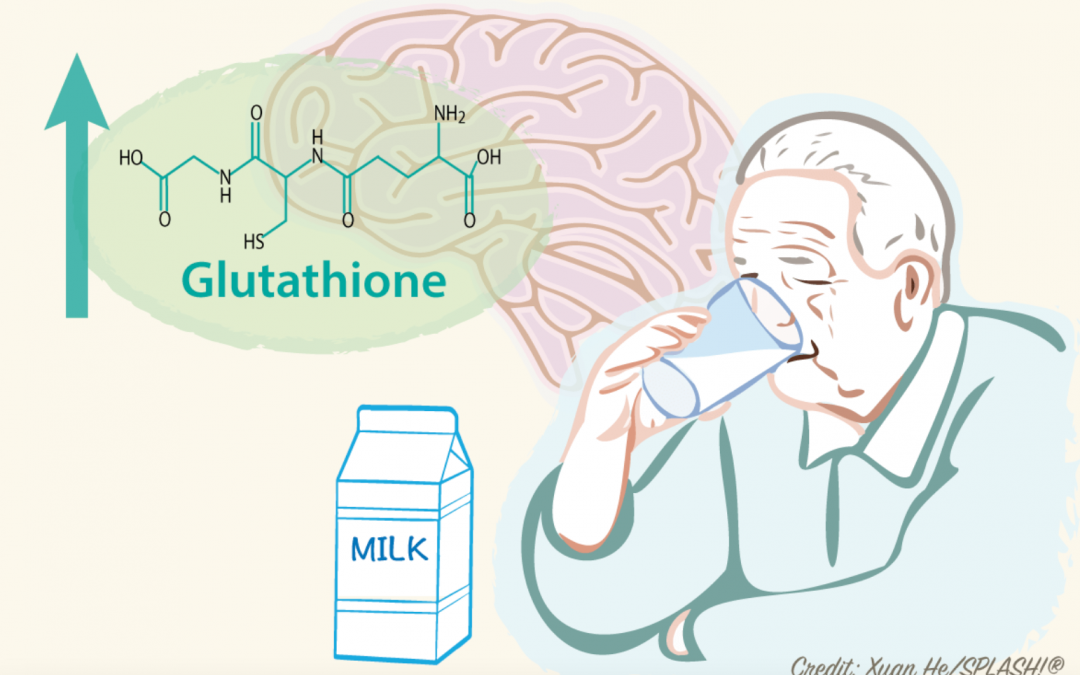 Written by: Lauren Milligan Newmark, Ph.D. for milkgenomics.org and SPLASH!

Aging adults have long been encouraged to drink milk to maintain bone strength and prevent osteoporosis . But recent research [1] suggests it isn’t just the skeleton that benefits from this nutritional advice—drinking milk can improve brain health as well.

As our brains age, the concentration of the antioxidant glutathione (GSH) declines and the risk of oxidative stress and the damage it can cause increases [2]. A new study [1] found that older adults that drank three cups of milk a day increased the concentration of brain GSH, restoring it to concentrations associated with younger adults after just three months. While we wait for science to come up with the fountain of youth, drinking the recommended daily intake of milk offers the potential to stave off age-related declines caused by oxidative stress.

The Dark Side of Oxygen

Oxidative stress is the unavoidable cost of using oxygen for cellular respiration. The process our cells use to turn food into energy for growth, digestion, reproduction, and immune defense creates unstable oxygen-containing molecules called reactive oxygen species (ROS) as byproducts. At low levels, ROS serve important biological purposes within cells, such as cell signaling. If levels aren’t kept in check, however, ROS accumulation in cells can result in oxidative damage to DNA, RNA, proteins, and the cell membrane, and ultimately cellular death.

Here’s where antioxidants, like GSH, come in. Antioxidants are molecules that can break down ROS and repair damage from oxidation. Humans make some types of antioxidants and others are supplied by the diet. But whatever their source, antioxidants have a full-time job and there is always “help wanted;” ROS are constantly produced throughout the body and the antioxidant supply needs to be constantly replenished to keep up.

Some things get better with age, like wine, whiskey, and cast-iron skillets. Unfortunately, the human body’s ability to keep up with damage caused by ROS declines over time. The brain is particularly vulnerable to oxidative stress; compared with other organs, it has a higher level of oxidative metabolism and lower concentrations of intracellular antioxidants [3, 4]. Over time, this imbalance favoring ROS can lead to declines in function and has been implicated in the development of neurodevelopmental diseases [1, 5]. The finding that GSH concentrations are lower in brains of people with Alzheimer’s disease and Parkinson’s disease prompted researchers to investigate the possibility of restoring intracellular GSH levels to both prevent and treat these diseases [5].

Because many antioxidants come from food, a team of researchers from the University of Kansas [3] decided to focus on associations between diet and brain concentration of GSH. Using a type of scanning technology called magnetic resonance chemical shift imagining, the researchers created regional maps of GSH concentrations in the living human brain and compared them with data from dietary questionnaires of older adults [3].

The results were somewhat surprising: GSH concentrations in several brain regions (e.g., frontal, parietal) were correlated with daily intake of dairy foods, despite dairy not being a source of GSH [3]. The researchers offered several possible explanations for the correlation: dairy is a good source of calcium and riboflavin, which are involved in the maintenance of GSH; dairy foods (particularly their whey proteins) are rich in cysteine, an amino acid that is necessary for cells to make GSH; dairy is also a source of two other important amino acids needed to make GSH, glutamate and glycine [1, 3]. Although many other foods contain these vitamins, minerals, and amino acids, dairy foods may have had the strongest correlation because they are one of the few to deliver all of them [1, 5].

Having established a correlation between dairy and brain GSH concentration, the team designed a randomized controlled intervention study to explore a causal relationship: Does dairy consumption increase brain GSH concentration [1]? They enrolled 66 older adults (60–89 years old) who had a low dairy intake (defined as 1.5 servings or less per day) and assigned them to either the control group, who maintained their usual diet, or the intervention group, who consumed three cups per day of 1% milk for the three-month study period. The intervention servings were selected to match the recommended daily intake of dairy (per the Dietary Guidelines for Americans). Magnetic resonance chemical shift imaging was performed on each study participant at baseline and at the end of the intervention period.

Over the three-month study period, the control group had no significant changes in brain GSH concentration. In contrast, the intervention group had a 7.4% increase in parietal GSH, 4.7% increase in fronto-parietal GSH, and an overall brain GSH increase of 4.7% (all of which were statistically significant) [1]. The researchers believe the results were also clinically significant. To put these numbers in perspective, GSH concentrations in brains of older adults are approximately 10% lower than in younger adults, suggesting that just three months of milk drinking was effectively able to restore GSH concentration in some brain regions [1].

The researchers cleverly named their study MILK (for Milk Intervention for Longevity at the University of Kansas). But does milk drinking actually increase your life span? The study was not designed to test for the effects of higher brain GSH levels on aging and longevity, and there are certainly many factors (e.g., genetics) that determine whether an individual will develop a neurodegenerative disease such as Alzheimer’s. However, if higher levels of brain GSH are associated with lower levels of oxidative stress in the brain, it stands to reason that milk drinking could play a role in mitigating the damage caused by ROS and slowing the associated declines in neural function.

This study is one of only a few intervention studies that have demonstrated an increase in brain GSH concentration and the only one to do so with a dietary intervention (as opposed to a drug intervention) [1]. The ability to influence brain GSH concentration with a commonly consumed food that is widely available offers a simple and safe alternative to drug trials [1]. The fact that they used the recommended daily intake demonstrates that small dietary changes could potentially have large impacts on brain health.