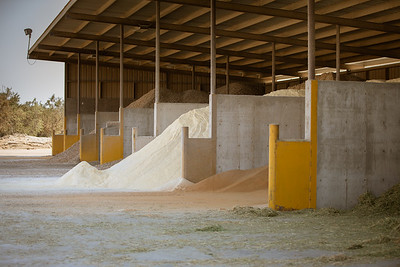 Following up on previous research estimating the carbon, water, and land footprint of California dairy farms over 50 years, this study quantified the variability in feed formulation from year to year to determine its impact on carbon footprint. The researchers found that using the formulated diet to calculate the nutrient composition from the Nutrient Requirement of Dairy Cows (NRC) tables yielded a very close estimate to analyzed diet.

Researchers compared the expected nutrient composition, estimated from the NRC tables of feeds, with actual sampled nutrient composition from six dairies with known feed formulation. The difference between what is formulated and what is consumed is important to quantify because it changes estimates for emission intensity.

Next, the study investigated the effect of changing diets on the environmental impact of dairy production. Dairy cow diets vary year to year due to cost fluctuations and availability. Researchers evaluated dietary data from the 2013 through 2017 CDFA Cost of Milk Production reports for both milking and dry Holstein and Jersey cows.

Finally, the researchers investigated how the changing prices of feed ingredients impacted emissions. The differences in diets resulted in variable enteric methane emissions between 2013 and 2017. Corn grains have one of the higher emission factors and contributed to the higher emissions for 2015–2017.

This study found that the optimal diet for dairy cattle in the state would have low neutral detergent fiber (NDF) content. Dietary NDF content has a positive relationship with enteric methane emissions. However, reducing NDF content comes at the expense of financial stability and might not be the most efficient way of lowering enteric methane emissions. Although diets varied in response to ingredient prices, the overall impact on carbon footprint was only 5.9%.

This study was funded through check-off dollars (California dairy producers), approved by the CDRF Board of Directors, and managed by CDRF.