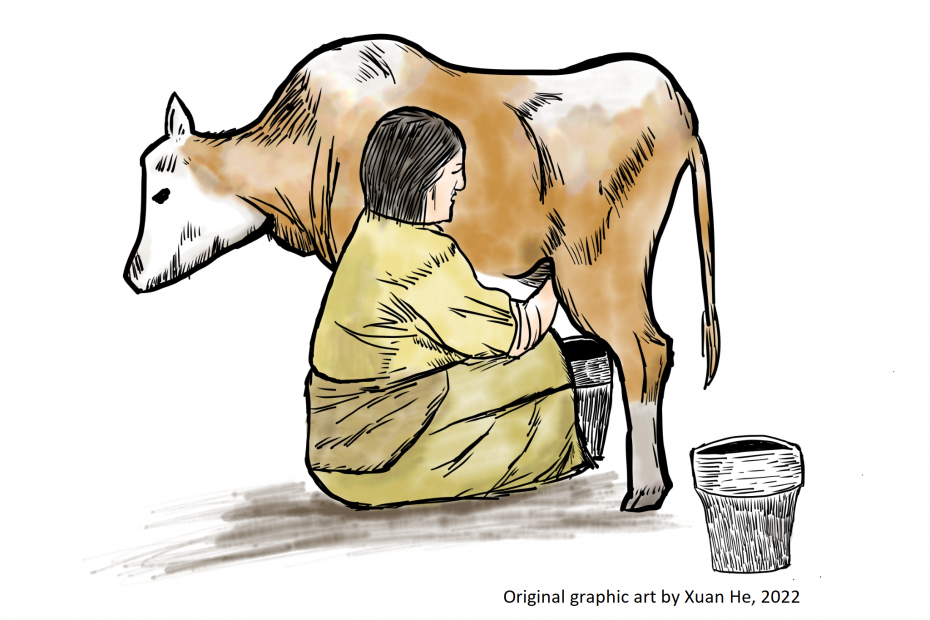 Don’t tell your dentist, but tartar can sometimes be a good thing. Prehistoric tartar deposits have become instrumental in helping archaeologists understand when humans first started consuming dairy foods. This crusty mineral build-up (also called dental calculus) acts like a dietary time capsule [1] because it traps and preserves food particles from decades of breakfasts, lunches, and dinners. Archaeologists interested in determining whether dairy foods were included in one of those meals trade in their trowels and screens for dental scalers and mass spectrometers to excavate tartar deposits for proteins specific to dairy, such as ß‑lactoglobulin (BLG). If a prehistoric person ate goat cheese, drank sheep’s milk, or nibbled on cow’s milk yogurt, there is a good chance the proteins from those foods became preserved like a fossil within tartar’s mineral matrix.

The most recent study [2] to perform these dental excavations—called paleoproteomics—focused on the origins of dairying in the Eurasian steppe. The grassland plains that span from Eastern Europe to Mongolia are arid and difficult for growing crops, and yet archaeological and genetic data suggest widespread human movement into these areas during the Early Bronze Age (ca. 3300 to 2500 BC). A long-standing hypothesis for the rapid expansion in this challenging environment argues that the people must have been pastoralists (or animal herders) that depended on horse traction, wagon transport, and dairy. Archaeologists have found evidence of carts and bridling materials, but there has been no direct evidence to support the use of domesticated horses or dairy consumption during the Early Bronze Age [2].

To test this hypothesis, researchers performed proteomic analysis on tartar samples collected from 56 individuals dated to between 4600 and 1700 BC from archaeological sites near the Caspian Sea, Kazakhstan, and Russia. Nineteen individuals came from the earliest period (4600 – 4000 BC), but only 11 dental samples had sufficient preservation for analysis. Of these, only one individual’s tartar deposits contained a dairy-specific protein (in this case, a casein protein from a bovine species) [2]. Because BLG is the most commonly recovered dairy protein (and almost always found in tandem with other dairy proteins), dairy consumption could not be confirmed with confidence [2].

In contrast, 15 of the 16 Early Bronze Age (3300 to 2500 BC) samples and 15 of the 19 Middle to Late Bronze Age (2500 to 1700 BC) samples had unequivocal evidence for dairy consumption. These samples contained BLG along with other dairy-specific proteins. Many of these proteins were genus-specific, allowing the research team to assign the dairy source to Ovis (sheep), Capra (goat), or Bos (cow) [2]. Two of the Early Bronze Age individuals even had milk proteins unique to Equus species (which the researchers attributed to horse milk, as opposed to donkeys, because horses were the only Equus species in archaeological assemblages from this period) [2].

These findings provide direct evidence for a shift to dairy consumption between 4000 and 3500 BC in this section of the Eurasian Steppe (aka the Pontic-Caspian Steppe). These dates are coincident with both archaeological and genetic data for major expansions into this region, supporting the hypothesis that dairy was a primary driving force of these population movements away from riverine settlements and into the arid plateaus [2]. Dairy would have provided a reliable source of nutrition and hydration in a dry, cold climate where crop cultivation was not dependable, and could have potentially been an important weaning food (and fluid) for infants as well [2, 3].

The presence of horse milk peptides on teeth dated to the Early Bronze Age was a particularly interesting finding as these proteins provide probable evidence for horse domestication in the Pontic-Caspian steppe region [2]. These are the earliest horse milk proteins identified anywhere in the world, which could indicate that this region was one of the earliest centers for horse domestication [2]. It is not clear whether the horses would have been part of pastoral herds or were ridden (or both). However, by 2000 BC, it is known that people in this region depended heavily on horses as evidenced by horse-pulled chariots in the archaeological record [2].

Another important unknown is whether these Early Bronze Age dairy consumers were genetically adapted to lactose digestion (via a mutation that allowed for lactase persistence after infancy, hereafter the LP gene variant). Tartar and ancient DNA samples taken from Late Bronze Age (ca. 1380-975 BC) burials from the eastern part of the Eurasian Steppe (Northern Mongolia) indicate a population of dairy consumers who lacked the LP gene variant [4]. Genetic studies suggest that a mutation associated with LP emerged in the Ukraine ca. 4000 BC but only increased in frequency across Europe, not Asia [5]. As a result, the LP gene variant is present in less than 5% of modern day Mongolians despite a subsistence economy that is still highly dependent on dairy [4].

As was true in other parts of the world [3], the adoption of dairy pastoralism in the Eurasian Steppe may not have been reliant on a genetic adaptation for lactose digestion. These prehistoric populations could have had cultural adaptations to lactose digestion, such as fermenting milk to make yogurt, kefir, and cheese to reduce lactose content. They may also have had alterations to their gut microflora that assisted in lactose digestion. Many modern-day populations without the LP gene variant have higher levels of bifidobacteria that increase the digestion of lactose and thereby reduce symptoms associated with lactose intolerance [6]. Dairy may have been critical for population expansions into the Eurasian Steppe, but contrary to what one might expect, genes for lactose digestion were not.